Happy St. Nicholas Day! Before there was Santa Claus, there was St. Nicholas. St. Nicholas of Myra was a historic Christian saint whose feast day is celebrated on December 6th, which is the anniversary of his death. He is most famously known for giving gifts in secret, during the night, to those most in need. One legend has it that he helped an impoverished father who could not provide a dowry for each of his three daughters. Without a dowry, his daughters would not be able to marry. Saint Nicholas placed gold coins in each of three small purses and dropped them down the poor man’s chimney. One version of this story suggests that one of the daughters hung her stockings out to dry and a purse fell into one of the stockings. While the traditions and celebrations of Christmas vary throughout the world, it is the universal idea that St. Nicholas is a bearer of gifts. In the secretive gift-giving fashion, the American celebration of St. Nicholas Day involves children placing their shoes outside their bedroom doors on the night of December 5th. If they’ve been good, they wake up on December 6th to find treats in their shoes. While people still partake in this tradition today, over time it evolved into the more popular celebration of Christmas whereas gifts are placed in stockings “hung by the chimney with care.” 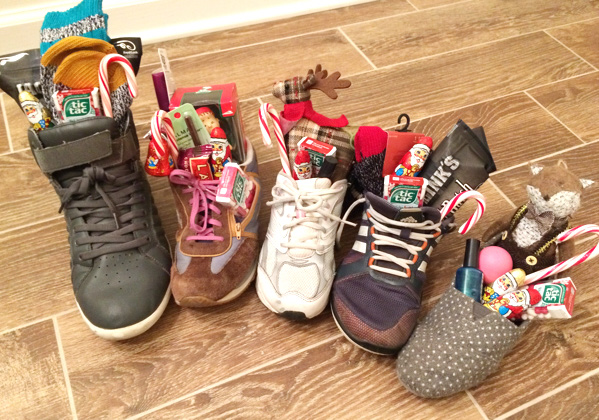