Sunday night, April 14th, 1912, the RMS (Royal Mail Ship) Titanic struck an iceberg broadside. It, and most of its passengers, were completely lost to the frigid (28°F) waters within two hours of initial impact. This story has been told time and time again since that fateful night. The recreation of this horrific event was so intriguing, that it was made into a number of movies and plays over the years. So powerful was this event that the first movie (Saved from the Titanic) made about it premiered just 29 days after it happened. It starred Dorothy Gibson, an American film actress who was a survivor. To have recreated for film the nightmare she survived, less than one month earlier, must have been nothing short of traumatic.

One interesting engineering note regarding the collision. Had the ship not attempted to steer away from the iceberg in a vain attempt to avoid impact, and had it struck the berg head on, as it initially appeared doomed to do, the RMS Titanic would have never sunk, and the great majority of its passengers (if not all) would have survived that night. By striking the iceberg broadside, five airtight compartments were breached. The ship was designed to withstand the loss of up to four airtight compartments before this unsinkable Goliath of a vessel would sink. If the ship struck the iceberg head on, it would have only lost two airtight compartments. As the RMS Titanic was viewed as “unsinkable” by its designers, it carried enough lifeboats to ferry passengers back and forth to another vessel if it got into trouble on the sea. What they did not anticipate was that all passengers would need access to the lifeboats at the same time, to escape disaster.

To clearly understand how different life was on the RMS Titanic, there are three sets of menus pictured below that perfectly illustrate exactly what passengers were served, depending on the class they were in.

Click on each menu to be taken to a recipe for one of the servings listed on that menu. When you find the recipe that appeals to you, get in touch with your Quaker Valley Foods Sales Specialist today! 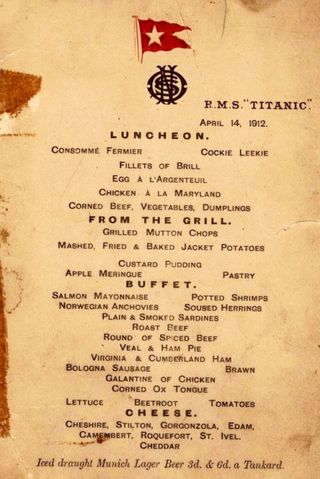 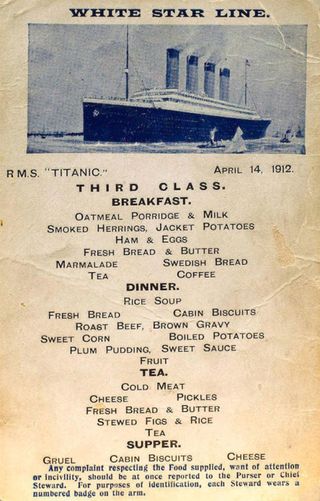