There are 25 billion chickens in the world, which means there are more chickens than people! Chickens were initially trained for cockfighting, then eventually became America’s favorite food at the dinner table.

The average American will eat about 80 pounds of chicken each year. At Quaker Valley Foods, chicken is one of our most popular meats. We sell everything from whole chickens to breasts to party wings, which are perfect for the month of September and the football season. Check out a great chicken recipe below you can enjoy this month! 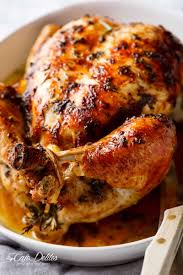