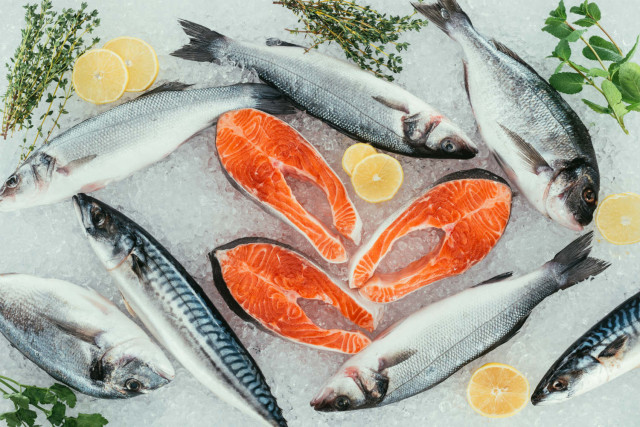 Have you ever wondered how fish is presented? 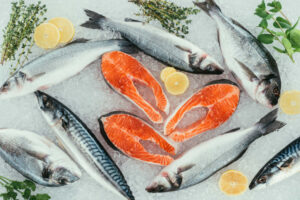 Below are some common ways.

If you ever caught a fish, it was whole round. Essentially, it’s untouched. It is the least expensive way to buy fish. Quaker Valley      sells a few items in this presentation style, Mackerel and Horse Mackerel.

The guts have been removed, but otherwise, it’s a whole fish. Kingfish and Tilapia are often found this way.

This is the same as the Whole Gutted, but the Gills have also been removed.
Snapper is most common item to find WGGS fish.

Head off, Gutted and Tailed (HGT):

Everything is removed. The tail is trimmed. So are all the other fins.
Our “Leardini” brand Croakers come HGT

We also have fish fillets and fish steaks. What’s the difference?

When you cut a fish from head to tail, along the spine, it is a fillet. 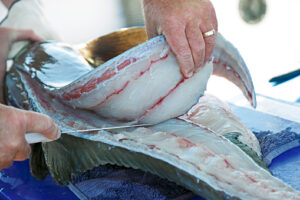 The amount of bones is minimized this way. Tilapia Fillets and Swai Fillets are fillets we carry. Each fillet can be divided into two parts. The thicker part called the loin.

Quaker carries cod loins and tuna loins. The thinner part came from the belly and is called the nape. The nape is used for further processing.

A fish steak is a cut through the fish and will have the bone in the middle. Kingfish are sold as steaks. A fillet would be entirely too big to use. Quaker carries a variety of kingfish steak sizes.

However, Tuna steaks don’t have a bone. Why? Tuna are very large fish. They are cut into loins and then the vertical cut is made to make Tuna steaks.

In short, if you want it, Quaker Valley has it!